The area in which I live is known for the incredible display of fall colors. It attracts many tourists during the harvest season.

The downtown section is usually decorated each year with some sort of seasonal festive display. The downtown section is not large - just a few blocks with a mix of new, artsy kind of stores and older ones that have seen better days. Unfortunately, this years decorating-on-a-small-budget town offering is more in keeping with the latter type of store.

It started out as a plan for a weekend craft activity. Kids from the elementary and high schools were invited to join in a scarecrow making event a couple of weekends ago. The scarecrows were life-size and made from recycled clothing items. The completed figures were then suspended from the lampposts along the downtown section.

The scarecrows began falling apart. Their heads' lolled forward and sodden items of old clothing dripped from the light fixtures. I drove by late one blustery evening. I'll swear that it looked liked several townspeople had hung themselves.

My daytime pictures do not quite capture the hideous spectacle, but I am sure they are enough to give you a sense of just how bad the crafts have gone. 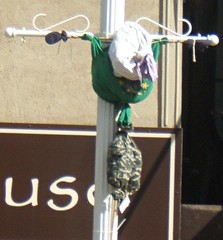 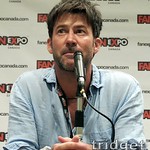 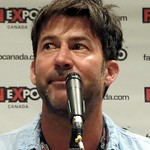 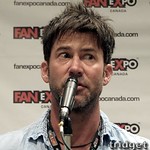 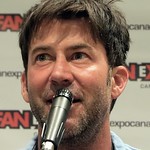 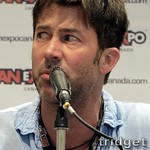 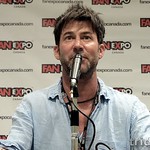 I was finally able to upload the video of Joe Flanigan's Question and Answer Session at Fan Expo Canada on August 23, 2012.

Credit goes to my daughter and her friend for most of the filming. They filmed the session so that I could just watch and enjoy. It's a little shaky at the beginning because we were just getting used to the camera that I borrowed to make the video. (Also, I think everyone stood up and then sat down again when Joe entered, including my "camera girl," and that caused a bit of shake, too.)

I have more about the convention at these links:

This set of pictures was taken at Fan Expo Canada's autograph session with Joe Flanigan on August 24, 2012.

They were taken with a different camera than some of the other pictures, so are not quite as sharp, and the image size is much smaller, but I still like them and figured I'd share these, too. 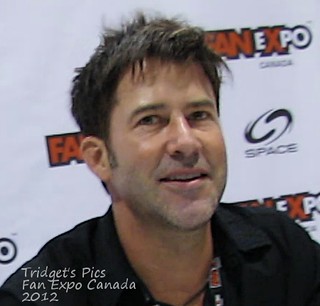 This set of pictures was taken at Fan Expo Canada's Q and A Session with Joe Flanigan on August 23, 2012. 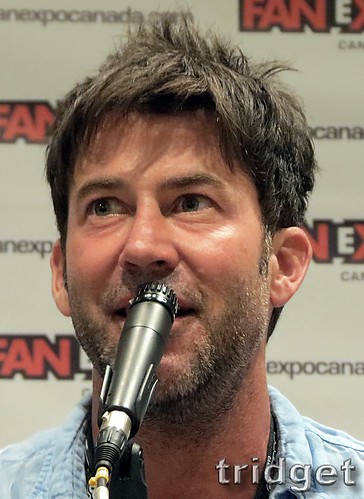 I've received some very positive comments, here at LJ, and on Thunk Sisters regarding my Fan Expo pictures, and I appreciate that people have taken the time to let me know they enjoyed them. I have to admit, though, that I think it is the subject matter rather than my photography skill that is the real drawing card here:-) Fandom fun is meant to be shared. I have enjoyed so many conventions pictures that others, and I am happy to be able to reciprocate. have taken over the years Anyway, since nobody's suggesting I call a halt to my picture spams, I'm posting yet another set of images.

The first picture is from the autograph session on the fourth day and the other three are from the third day.

I mentioned that I borrowed a camera to take pictures as my own camera is now defunct (not that it ever really worked well to begin with.) The better camera certainly helped. Also, the lighting was quite bright at Fan Expo and that made it easier to get good pictures.

The easy part of shooting pictures of Joe Flanigan was that because his face is so expressive, I just tried for reasonably clear shots of his face. I think they turned out well, considering I had no idea how to really work the camera. I like that such a variety of expressions were captured.

The hard part about photographing him is that he is never still, even when sitting down. The camera I borrowed had what was supposed to have a very good autofocus feature, but it was going crazy trying to keep up with him.

crysothemis: Feel free to save, transform, or reupload. I'm basically cool with anything as long as you don't try to make money off of them or pass them off as your own. I'd appreciate notification if you use them for anything, such as artwork, just because it's fun to see how you've used them.

Here's another few pictures in the series. These ones also from the fourth day of the convention.

crysothemis: Feel free to save, transform, or reupload. I'm basically cool with anything as long as you don't try to make money off of them or pass them off as your own. I'd appreciate notification if you use them for anything such as artwork just because it's fun to see how you've used them.

The last couple of shots were taken with a zoom-in thingy. I couldn't really get the hang of it and you can see the shots are blurred in some places. I don't think I got the focus quite right. However, I figured I would post them anyway as I like the variety of facial expressions. Actually, I am surprised I got any shots at all. I am generally a terrible photographer. (It is fortunate that my ex-husband took a lot of pictures at our son's graduation because I did not take one single useable shot.)

As promised, I am starting to post my Fan Expo pictures. I will be posting them in batches over the next week or so.

This set is actually from the fourth day of the convention. The pictures were taken during one of Joe Flanigan's autograph sessions. My daughter and I both had cameras and we took turns taking pictures for each other and for my son when we went up to get autographs. Our own camera was not working so we borrowed a couple. We didn't fully get the hang of all the settings on them, but we liked the pictures we snapped and that's all that matters.

crysothemis: Feel free to save, transform, or reupload. I'm basically cool with anything as long as you don't try to make money off of them or pass them off as your own. I'd appreciate notification if you use them for anything such as artwork just because it's fun to see how you've used them.

I've been working through a series of technical challenges in uploading my images from Fan Expo. I think I've finally got it all working now. It's pretty late at night now, so I'm going to have to save the rest of the work for another day. Actually, it will probably take a few days as the images are uploading at a snail's pace because they are very large and my internet connection speed is very slow. In the meantime, I thought I would post one of the images as a sneak preview of what is to come.